Formal education was established when a school house was built in 1858, where " a more exact knowledge of the Faith and the learning that excels riches" could be imparted to children.
The Sisters of Mercy (Goulburn) accepted the invitation to establish themselves in Boorowa, arriving in August 1882. School activities subsequently moved to St. Patrick's Church. Tenders were invited for the erection of a Catholic school with plans to accommodate 160 children, and on the 8th July through the generosity of Mr. John Joseph Donovan LLD, St Joseph's school was blessed and solemnly dedicated to the training of children "in virtue and learning" (Eruditio Cum Virtute).
Despite the shortage of man power and materials due to the 1914-18 World War, the building known as St. Brigid's School was officially dedicated and opened on 16th June, 1918 and served as the Catholic High School for the district.
In November, 1976, the Infant's Block was placed in position, and at that time, major renovations to the original buildings took place. As part of the building programme in 1993 a new administration area was established as well as renovations to the toilet blocks and complete refurbishment of all the classrooms.​
The first lay Principal was appointed to St. Joseph's in 1980. The Sisters of Mercy remained on staff until 1987 and maintained a presence in the parish until 1994. A new Library was built in 1997 and dedicated as the McCauley Technology Centre in 1999. In 2000 major renovations were carried out on the Infants block and these were officially opened in 2001.
In 2003 a shade area was constructed between the Infants building and the Primary building with a brick wall defining the cement and grassed areas. This was opened in May 2004.
2006 saw major work undertaken to improve landscaping around the school. The school was successful in obtaining a grant under the Federal Government's Water Grants program that allowed for the construction of a large tank to capture excess rainwater and the installation of an extensive underground sprinkler system. The landscaping also included the replaced of old paths and paving as well as the construction of new paths and garden beds.
The Federal Government 'Investing in Our School's' Program provided funds over the 2006/07 school years allowed for further improvements to take place. The student's toilets were refurbished, wet rooms were constructed in primary classrooms and the refurbishment of some classrooms commenced. Improvements were also made to the infant's block.
The refurbishment of classrooms continued in 2008 and this was funded by the parent body and the through donations from the parish.
In 2009 the school was successful in obtaining a "Solar School's Grant' from the Federal Government which enabled us to install a 3.5 KW solar system as well as taking other energy efficiency measures such as insulating several building and installing awnings to keep out direct sunlight in summer.
2009 was also the year the Federal Government announced as part of 'The Economic Stimulus Package' two sources of funding for primary schools. St Joseph's was fortunate to gain 'School Pride' funding which allowed us to e landscaping such as the construction of a new playground with a permanent roof, laying of a new slab for the shed and numerous little tasks. The second source of funding 'Schools for the 21 st Century' enabled us to construct a new library/ICT centre as well as finalise the refurbishment of all classrooms.
This includes the provision of electronic whiteboards in all classrooms as well as the new library. This funding allowed us to also lay a new floor in the hall. 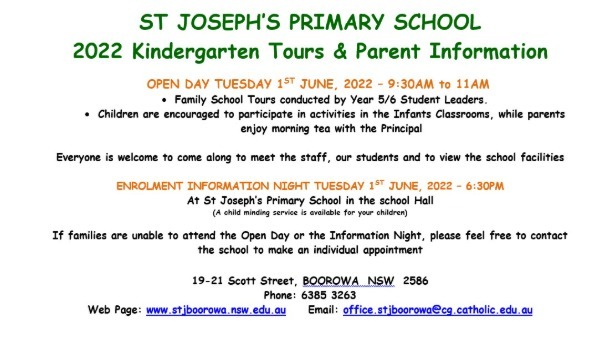 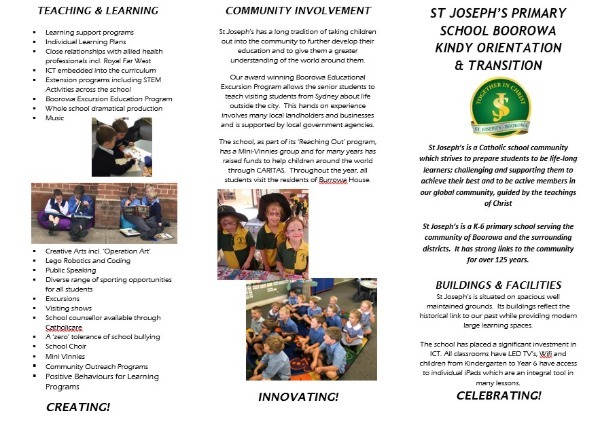 Please click on the below link for more information and to purchase tickets: (link has been corrected)

Please click on the below link for more information and to purchase tickets:

Easter Message-The Way of The Cross